I’m no longer a virgin! 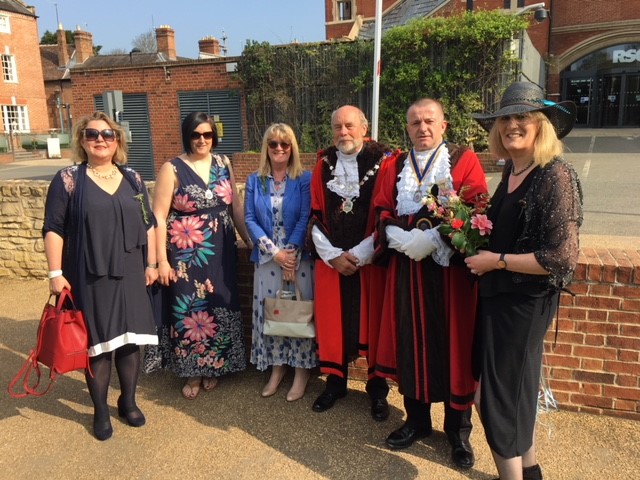 Well, that’s what I was told at the weekend! I was declared a “birthday virgin” when I arrived in Stratford-upon-Avon to take part in my first ever Shakespeare’s Birthday Celebrations.

I was in the Bard’s birthplace as the guest of an incredibly talented lady called Melissa Mailer-Yates, with whom I’ve been doing a bit of work recently.

Melissa is the CEO of Shakespuss & Co Ltd. Shakespuss is a concept based around a cartoon cat and is designed to bring Shakespeare to a pre-school and early school years generation.

Melissa was thrilled to be given such a prominent position in the town for the Shakespeare’s Birthday Parade, with her own corporate emblem and flag. The Shakespuss flag was unfurled by actor Robert Lister, better known as Lewis from The Archers on BBC Radio 4.

The parade was followed by a boat ride and then lunch at the Crowne Plaza. We were in fine company and I found myself chatting to the lovely Mayor of Royal Leamington Spa, Councillor Caroline Evetts.

As part of the luncheon we saw the presentation of this year’s Pragnell Award, which is given to those who have extended the appreciation and enjoyment of the works of Shakespeare.

Many prominent actors have received the award in the past, including Sir Ian McKellen and Dame Judi Dench. This year the recipient was Jane Lapotaire and her acceptance speech was genuinely inspiring.

I’d like to thank Melissa for inviting me. The CC team are really looking forward to working with her on the next round of investment for Shakepuss, which we believe has the potential for global success.